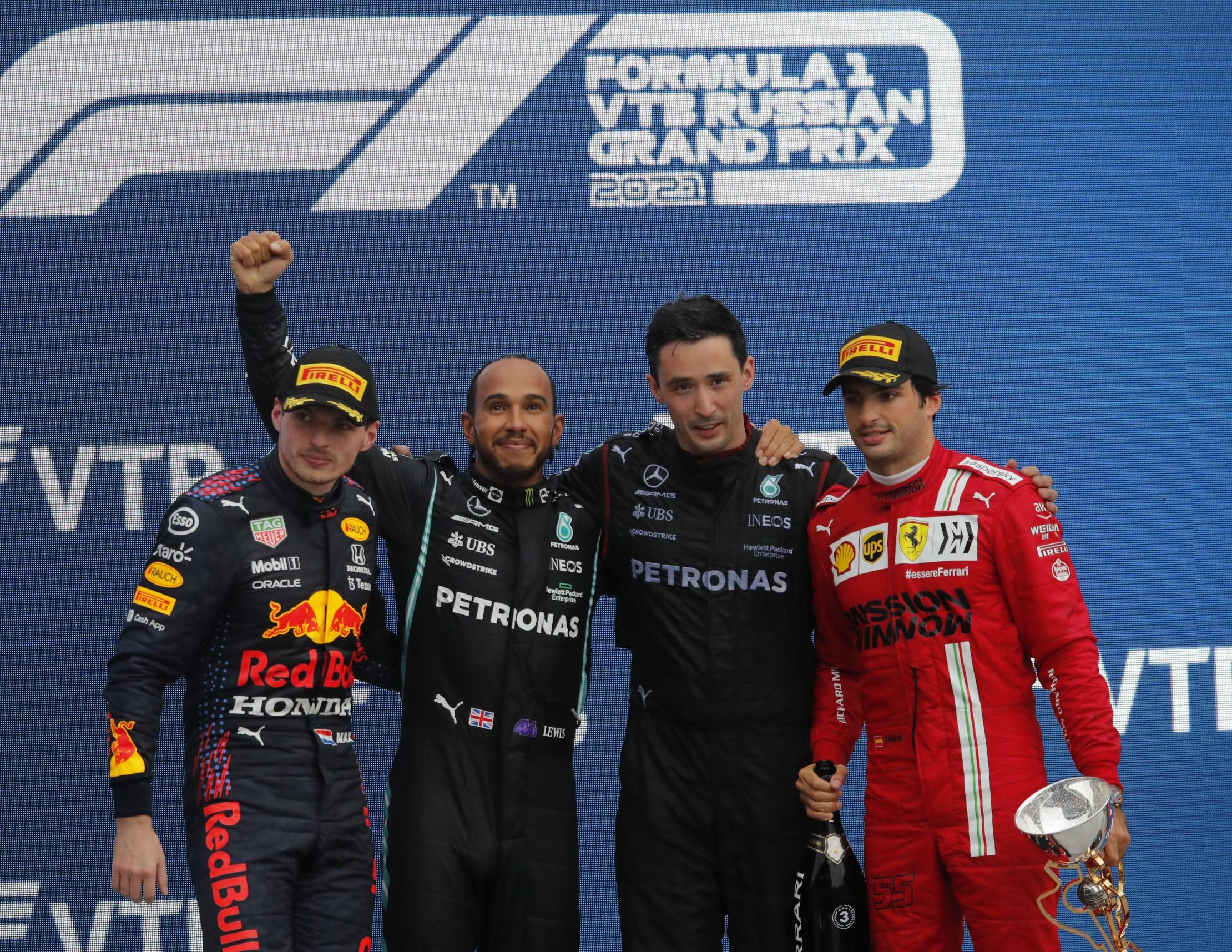 Seven-time world champion Lewis Hamilton smashed through another record as he became the first Formula 1 driver to tally up 100 wins after victory at the 2021 Russian Grand Prix, in what was an enthralling race at Sochi.

Hamilton, who started fourth on the grid, was seventh at one point after a poor start, but managed to climb slightly back up the order only to be stuck behind Daniel Ricciardo. However, once the McLaren driver pitted, Hamilton was released and stormed through the field after he put on form fresh tyres, only to find himself behind Lando Norris.

In the closing stages it looked like Norris was going to take his maiden F1 win, but a late rain shower caused chaos and the McLaren man decided not to pit, whereas Hamilton did come in – which in hindsight was the right decision – and he stormed to victory in Sochi.

That rain really shook things up at the end, and Max Verstappen eventually took second place, coming from last, and Carlos Sainz put his Ferrari in third.

Norris put his McLaren on pole position for the first time in his F1 career, and previously at Monza he had his best ever finish of second.

It looked as if he was on for his maiden F1 win and lead the race right up until Lap 51 when he spun off while still on slicks after decided not to come in for intermediate tyres.

Ultimately his gamble didn’t pay off and he slid into the barriers, before also sliding off at the pit lane entry which further compounded a torrid end to the race.

“I don’t know where to start,” a devastated Norris told Sky Sports F1 after the race. “I’m unhappy, devastated in a way. We made a call to stay out and we stand by that. It was the wrong one at the end of the day but I made the decision just as much as the team. It was more that they thought I should box and I decided to stay out. It was my decision, I thought it was the way to go.

“When it’s only two laps to go, when there are 20 to go you’re maybe not as aggressive with decisions. We did what we thought was right, which I’m happy with. It was wrong at the end of the day but everything until then the guys did an excellent job. I’m happy with everything apart from that one decision which we’ll review and try not to make again.”

Verstappen rampaged through the field in the first half of the Grand Prix, making light work of almost every driver on the grid and was up to 14th place after passing the Mercedes of Valtteri Bottas just seven laps in.

After the pit stops Verstappen found himself behind a train which included Daniel Ricciardo and Carlos Sainz, before Fernando Alonso leapfrogged the Dutchman after he pitted much later and had fresher tyres.

The race though, came to Verstappen at the end as a correct strategy call to put his Red Bull on intermediate tyres and he stormed through the field to eventually finish behind his Drivers’ Championship rival, and limit the damage he could have suffered after starting in 20th place.

Carlos Sainz started second and finished third in his Ferrari behind the two title protagonists.

The Spaniard should be commended for his start after which he leapfrogged Norris and led for the first quarter of the race, but after he pitted early it looked as if he wouldn’t be able to hit those early heights again.

Sainz was even given a message over team radio that indicated the team were targeting a fifth place finish, much to the driver’s chagrin. Nevertheless, he was the first to call for intermediates and that was a decision which paid off.