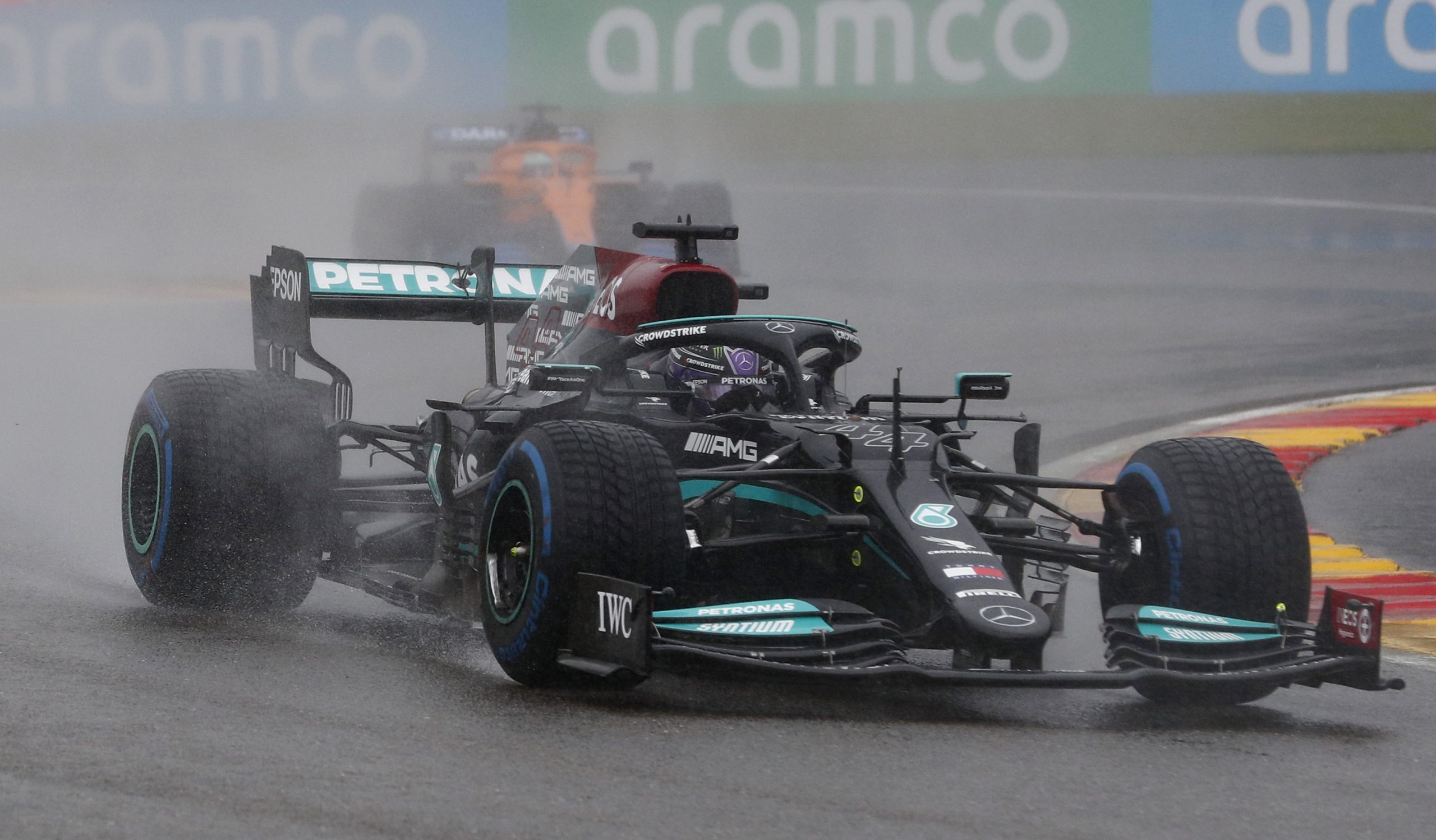 In the end, the record books will show that the 2021 F1 Belgian Grand Prix took place and was won by Max Verstappen. Enough laps were completed for points to be awarded, albeit half the amount usually handed out.

We even had a podium ceremony with Verstappen, George Russell and Lewis Hamilton all spraying sparkling wine in front of fans. It was a special moment for the Williams driver, who’s seemingly never-ending run of bad luck couldn’t deny him a second-place finish.

None of that should take away from how farcical the events of Sunday were.

Fans and pundits often say races will long be talked about after they’re completed should they deliver on excitement or provide us with an unexpected result just like at the Italian GP in 2020. There have been several examples of that so far in the 2021 F1 season, with races in Hungary and Bahrain proof of that.

The 2021 Belgian Grand Prix will now fall in that category as well, but for all the wrong reasons.

First and foremost, it must be said the decision not to race was the right one. The safety of drivers, marshals and spectators is often taken for granted, but Lando Norris’ accident during Q3 on Saturday was a reminder that there is often a thin line to navigate when it comes to entertainment and danger.

Having said that, the FIA and F1 need to take a step back and reassess what transpired on Sunday in Belgium. Mercedes boss Toto Wolff called the amount of rain that fell a “freak” event for the sport, which it was, but that doesn’t excuse the decisions that were taken in order to ensure the 2021 Belgian GP could be classified as a race.

Race Director Michael Masi denied suggestions that the laps completed behind the Safety Car, which came after a lengthy delay, were done to meet the two-lap minimum needed to hand out points. He also stated the goal was to try and find a window to get some racing in, something that obviously failed to happen as the race was quickly red flagged.

“I think the decisions taken by race control were absolutely correct.”

While Masi comments should be taken at face value, they likely ring hollow to all those that were in attendance and all those that were watching from home. It was clear for everyone watching that track conditions were poor when the race was slated to start at 15:00 local time, and that they hadn’t improved hours later when the cars took to the track again.

Would the cars have been sent out on track for two laps if that wasn’t the minimum required to make the race official? We’ll never know, but certainly that rule should be revisited. In a season that has seen so many positives for the sport, handing out half points for Sunday’s event is farcical.

Perhaps F1 should consider only awarding half points if 50 or 25 percent of the race is completed, as used to be the case. This way, there is no rush to get the drivers to parade around behind the Safety Car in ludicrous circumstances.

It wasn’t the only rule to be questioned. Did the race start at 15:00 local time or 25 minutes later when the three-hour rule kicked in? Was Sergio Perez allowed to participate in the race after crashing on the way to the grid?

Poor decisions all round

These are all things that should be simplified and clarified, especially as the confusion did nothing to brighten the humour of those watching from home and those in the stands.

Given how much rain had fallen at Spa, and that the weather forecast for Sunday’s race made it clear we weren’t in for a standard raceday, perhaps F1 should also look into alternative plans in the event a race can’t happen the day it is planned.

Rather than increasing the number of races in what is an already congested schedule, perhaps more open weekends would give the sport more flexibility should a similar situation happen in the future.

Other sports, like football, postpone matches if weather proves to be too much of a problem. The fact football can do that despite its clogged fixture list, but F1 can’t due to logistical issues, is something that should be looked into.

This is even more imperative when F1 CEO Stefano Domenicali’s comments about handing out refunds to fans is considered.

While the likes of Lewis Hamilton and Daniel Ricciardo said they thought fans should get refunds, Domenicali said he didn’t agree with the suggestion, stating that perhaps the promoter, who handles tickets, could offer some form of compensation.

Hopefully common sense kicks in and a satisfactory solution can be found because although the record books show the 2021 Belgian GP took place, you might get a different response from someone that braved it out through Sunday’s downpour.